A night for tech start-ups in Singapore | Techgoondu 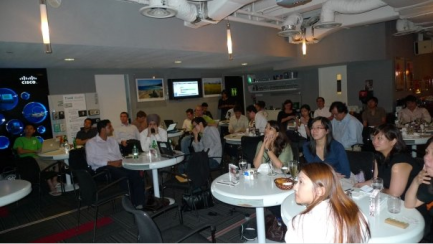 Start-ups who presented include: (see original post for links)

* Twinity (Jeremy Snyder): a 3D online-world that replicates real world cities in a virtual environment. The city of Berlin has already been launched, and both London and Singapore will be up later this year. According to Jeremy, they have about a 100,000 sign-ups since the launch of Twinity in September last year in 2008.

* Brandtology (Aaron Koh): a social media monitoring start-up that help companies makes sense of the big bad web by mining sentiments from it. Brandtology is founded by CEO Eddie Chao, who previously incubated managed security services player e-Cop that was acquired by Temasek in 2007.

* Makeaffinity (Thomas Tan): ever wanted to control robots over the internet to slug it out in a death match? Now you can with Makeaffinity’s robot sharing platform, which allows folks to play with and make web robots without much programming whatsoever.

* 2359 Media (Hong Ting and Wenhan): founded by a trio of passionate entrepreneurs who just finished their NUS studies and a stint in Silicon Valley. 2359 Media is an advertising platform for mobile phones utilizing location based services.

* Neat Co (Sarabjit Singh): Neat co, a small US company with a second office in Singapore, was the only physical tech appliance company amongst the presenters. Showcased was their contextually aware OCR reader, a smart scanning solution for receipts and the like.

* Phokki (Sean Seah): And lastly, Phokki, a start-up which turns your photos into works of art via a platform that links artists to end users directly. I’ve written a post on Phokki before.

We had a couple of other start-ups who didn’t present like seemeCV and Airvert. Not to worry. Due to good interest in this first event from anecdotal feedback (thanks to those who gave theirs!), the Techgoondus will think about running this on a semi-regular basis once in a few months. Will keep you readers posted if we do run this again. Meanwhile, if you’re interested in ideas on this front, feel free to drop me an email.

via A night for tech start-ups in Singapore | Techgoondu.