Fancy a sneak peek into the real world of haute couture and flashing camera bulbs?

We’re looking for a bunch of trendy, stylish RippleVoxers keen on being a part of

Our RV SUPERSCOUTS will get hot access to all the glitz, glamour and gossip of

the show. We’ll take you behind the scenes, slip you production secrets and give

you juicy insider information on the models.

We’ve even got exclusive invites to the press conference, VIP private launch party and even an opportunity to meet the models up close and personal or be involved in the production shoot!

RippleVox is your one and only source into the sensational lives of the modeling elite – sign up now!

SINGAPORE, May 2009, the signing of a Memorandum of Understanding (MOU) between multimedia production agency Refinery Media and Exploit Technologies Pte Ltd – a member of A*STAR – will see the beginnings of Substream, the latest webbased subtitling technology to hit Singapore’s new media industry which allows viewers to switch between English and Mandarin subtitles with ease as they view online programmes, including SUPERMODELME.tv, a reality model search conceptualised and produced by Refinery Media. 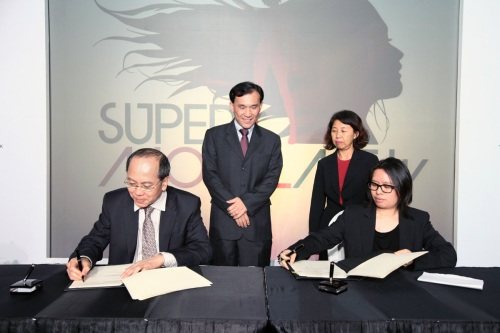 “A homegrown start-up like Refinery Media is a bright spark in today’s economic climate. I am impressed with the drive and courage of Refinery Media’s founder, Karen Seah, in investing in a new media startup despite the crisis. This is an inspiring story of how a young Singaporean pushes on, despite the downturn, to leverage made-in-Singapore technologies to find open up new market opportunities,” said Mr. Boon.

Set to debut on 16 June 2009, SUPERMODELME.tv is a twice weekly, 20-episode online model search that will showcase the ups and downs encountered by ten aspiring models from Singapore, Malaysia, Korea, Thailand, the Philippines and even India, as they compete for the Grand Prize of S$10,000 and for the chance of becoming the next prominent Asian face to grace runways and fashion magazines.

Hosted by Singapore’s first supermodel, Charmaine Harn, the road to success for the triumphant model will not be easy as they must deal with the pressures of living together under one roof. Above all else to avoid weekly elimination, they must impress a panel of resident judges, made up of established fashion industry veterans, including prolific fashion photographer Geoff Ang and guest judges such as fashion designer Frederick Lee and celebrity hairstylist, David Gan, through a series of specially designedchallenges. 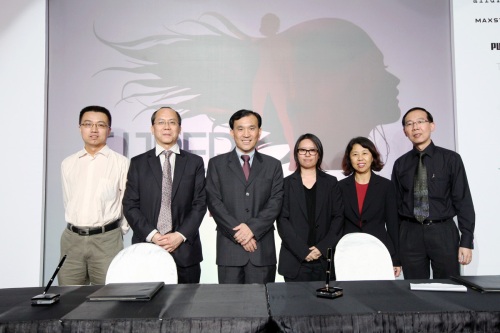 SUPERMODELME.tv is not your average web-based reality programme with the introduction and use of Hyperspot technology, the hottest tech-speak that will bring virtual lifestyle entertainment to the very next interactive level. With Hyperspot technology enabled, viewers can receive real-time information on the models’ apparel, as well as exclusive hair and beauty tips, simply by clicking on the images of their choice. Viewers will also be able to enjoy instant information on the brands, prices and even details on where to buy the outfits worn by the models.

At the same time, there will maximum programme participation as viewers can interact directly and freely with the models via online voting, web conferences, virtual chat-rooms and even post their comments and thoughts about the programme on the website.

“SUPERMODELME.tv – Asia’s most groundbreaking online reality programme, is the result of my vision and attempt to bridge the vacuous canvas and connection between the fashion world and the tech-savvy audience. The audience will be able to experience the thrill and receive immediate fulfilment of knowing where to purchase that desirable get-up, for example, or even learn the most up-to-date methods in coifing chic runway hair-dos”, added Ms Seah.

“We are proud and excited to be associated with this reality TV show made for the Internet. It showcases a new engagement model for both TV viewers, and Internet users used to watching videos online. StarHub Mobile customers will also get exclusive mob-isodes of ‘behind the scenes’ footage and ‘confessions’ filmed by the models themselves using StarHub-provided camera handsets. We are pleased to provide our Hub Trooper Premium Technical Support service to Refinery Media where the cast and crew will enjoy the extensive range of StarHub’s entertainment, communications and connectivity services on location throughout the shoot. They will be able to access to StarHub’s cable TV programmes while staying in touch with the world, and their friends and family both online and on mobile”, said Ms Iris Wee, Head of StarHub’s Marketing.

TOP 10 Models in SUPERMODELME.tv and the judges’ 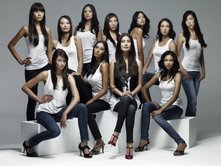 Taking the Singapore and Asian fashion scene by storm, fashion and advertising photographer, Geoff Ang has been creating beautiful, thought-provoking and edgy pictures for many years. A self-taught lensman, 32-year-old Geoff has been shooting since the age of 16. In 1998, he set up GEOFFSTUDIO, doing still-life photography. In 2001, he began to specialize in fashion photography. Now, he is indisputably one of the most in-demand fashion photographers, both locally and internationally. His relentless pursuit for visual creativity has led him to directing TV commercials.

Geoff’s accolades include Singapore Fashion Awards where he won “Fashion Photographer of the Year” after only eight months in the fashion business as well as advertising awards in the Clio, NY Festivals, The One Show, Indonesian Advertising Awards and the London International Advertising Awards.

After graduating from Paris’ Parson’s School of Design and SPEOS Paris Photographic Institute, Olivier Henry decided to leave France in search of a new journey. He moved to Singapore nine years ago and started Milk Photographie. Since then, he has built up an impressive roster of clients including Evian, L’Oreal, Raoul, Mont Blanc, Mercedes Benz, Johnnie Walker, Veuve Clicquot, Singapore JewelFest, Singapore Airlines, Sony, Levi’s as well as numerous local and international publications. Most well-known for his portrait photography, Olivier has shot many local and international celebrities and artistes. He was also commissioned to shoot Sophia Loren, Debbie Gibson and The Pussy Cat Dolls’ portraits.

Jeanette Ejlersen is the fashion and beauty director of Her World, Singapore’s No. 1 women’s magazine. She has been dubbed “Singapore fashion world’s queen-maker” for having plucked a fresh-faced Zoe Tay from the streets 20 years ago, seeing the promise in the late model Bonny Hicks and launching the careers of models Jacqueline Albas and Serena Adsit. Jeanette has been in the industry for 24 years, having started off as a fashion intern with the now-defunct GO magazine in 1982.

Grace Lee is the Editor-in-Chief of NuYou magazine. A leading Chinese-language fashion and beauty publication in the region, NuYou has two editions in Singapore and Malaysia. Grace was instrumental in starting the Malaysian edition and it is now one of the most widely read Chinese magazines in Malaysia. Popular and widely respected for her intimate knowledge and up-to-the-minute predictions of fashion trends, the fashion industry veteran has been invited to judge many fashion design competitions including the Mercedes-Benz Asia Fashion Awards. Her passion is to help the world appreciate Asia Pacific’s best fashion designers.

Register now and be among the select few to watch pre-show videos and trailers, receive exclusive SMMTV party invitations, and even spend a day on the set of this groundbreaking online reality series!